Forget the middle-east…Dubai can wait! The north-east is where it’s at for a family holiday these days!

Now, don’t get me wrong, put me on a plane to Dubai and face me with seven star service and uninterrupted sunshine for a week and I would probably choose that over Alnwick, Northumberland, BUT – we have just returned from a wonderful five days of family time and I can honestly say we would highly recommend it.

We booked a little house called Red Door via cottages.com – a website we use quite regularly, especially since having the children.

It wasn’t the best, being totally honest. But it was clean and a good base from which to travel around Northumberland. And since it took us almost a month to decide what we wanted to do and finally get round to booking something, we were lucky to find anything at all that didn’t cost us a month’s mortgage payment!

Mr O’s family are from Northumberland, and he spent much of his childhood holidaying in the area – something that prompted him to want to take our children up there. So we tootled on up the A1 and found ourselves in Alnwick – a beautiful little market town on the South Bank of the River Aln.

If you’ve never been to Northumberland, you could probably be forgiven for wondering what the fuss is all about. Why would you head so close to Scotland and not cross the border? What is there up there but old coal mines? And you probably think it’s all just about Lindisfarne?

You would be wrong!

The best day by far, in my opinion, was the day that we spent at Alnwick Castle and The Alnwick Garden.

Mr O would disagree – he would say it was the day spent on the beach at Seahouses…but since I HATE sand (see previous post here for more info!) I will not agree with him, even though I felt myself the most relaxed I’ve been in a while on that beach.

It was, actually, if I dare admit it, blissful.

The Alnwick Castle and Garden experience, whilst quite expensive, was a full day of brilliant family fun. We spent hours and hours outdoors (yep, the small ones slept well that night!!) exploring gardens, finding out names for plants, wading through fallen blossom with Ruby taking the opportunity to throw it at us at every turn of the path, and laughing our socks off at the silly court jester who threw fire and genuinely made Ruby fear for her safety – hilarious to see!!

I quite fancied the ‘On Location’ tour, which showed you all the bits of the castle that had been used in films such as Harry Potter and Robin Hood, Prince of Thieves – but since that took place at 3.30pm and Ruby had had all of her fun already, she deemed it “too boring” and so we hot footed it out of there before a huge wobbly/major embarrassment kicked in.

That evening we ate out at a place called The Jolly Fisherman in a teeny little village called Crastor. We tried Oysters for the very first time (and we weren’t sick!) and enjoyed gorgeous fresh fish and lobster in beautiful surroundings – with lashings of Alnwick Gin! 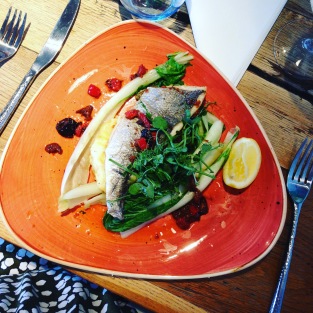 We saved money where we could by making sandwiches for lunch and we ate in the house a couple of evenings, which actually worked out quite well all in all.

If you’ve seen my Instagram feed you will know I’ve already said that I need another holiday to get over this one though.

Whilst my brain switched from overdrive to relax, my body is shattered. We didn’t sleep very well at all with Henry in our room – and not at all most nights as he decided that he couldn’t be without me and clung to me like a limpet (an after-effect of his operation?).

Still – it was a brilliant holiday, and we crammed in enough to make the memories last for some time, I hope.

Worn out but very happy.

A good summary for a lovely time with the family.

Roll on the next staycation…Devon in July!

Children are resilient, they said.

They bounce back so quickly, they said.

And…thank goodness, but it seems they were right!

Henry’s operation and subsequent time in recovery took all of 40 minutes. He was back in my arms before I’d even had a chance to finish my Costa Coffee hot chocolate in the strange little cafe at the entrance to Queen’s Hospital, Burton.

The hospital at which I’ve had (too) many a stay, at which Ruby was born, Henry was born, treated for meningitis and the hospital that I wished we’d never have to return to.

He cried so much when he woke from surgery that I could hear the theatre nurse bringing him to us from the other side of the hospital. I grabbed him and held him so close, and he clung to me so tightly I was certain I’d never let go.

After a mammoth sleep of 1.5 hours in my arms (if I’d known he was going to sleep that long I would have sat on the bed…my bum was so numb!) he woke up and demanded a biscuit. And that’s when I knew that everything would be alright!

After 10.5 hours without food or water, the bottomless pit then proceeded to consume the world’s biggest banana, an entire pack of Mini Cheddars, 2 x digestive biscuits and a ham sandwich along with about 4 Tippee cups of water!

After he’d finished his feast he grabbed his coat and made a run for it. Seriously. He was out of the door and saying goodbye to the nurses before we knew what was happening!

We were exhausted. He was on cloud nine.

So we brought him home.

Our baby yelled for his sister the minute we pulled onto the drive, and she was thrilled to have him back.

He had a good night of sleep, only woken by Ruby who was crying so much after a bad dream where a cat was biting her bottom (no idea what that’s about!?) and seemed perfectly fine. Until we had to administer his drops.

The poor thing screamed and cried and desperately tried to wriggle away from me. 3-4 drops 3 times per day to try and help his ears heal and to get rid of the infection that the surgeon found whilst in there adding the grommets.

But, two hours later he was back on fighting form, hiding in the toy box, shouting at Ruby, running around the house and generally being a tinker… 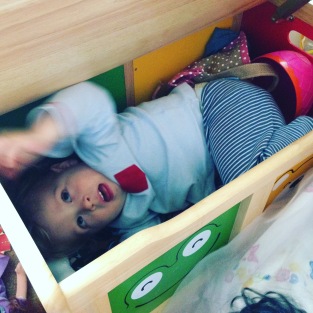 It will take him time to fully recover. I know that.

He spent much of the first evening after the op cuddled into me, crying when I left the room and resisting sleep – almost scared to drift off, perhaps a hang up from the operation? Something isn’t quite right as he just will not let you leave him, when normally he would snuggle his monkey and drift off without issue (most of the time!!).

I really hope that putting him through this procedure proves to be the right thing to have done.

We’ll see in three months time, I guess, as that’s the next time we need to see the consultant.

Until then I’m taking every opportunity for extra snuggles and cuddling him in close.

Tomorrow our son, Henry, goes into hospital for an operation.

When he was just 3 months old Henry contracted Bacterial Meningitis (read about it and learn the signs & symptoms here…), which was horrific to put it mildly.

Thankfully, he came out of it the other side relatively unscathed.

However, at a routine post-Meningitis hearing check, the Audiology team discovered a hearing loss and, six tests later, that hearing loss isn’t getting any better.

So tomorrow, Henry heads into surgery to have grommets inserted.

Grommets are, for anyone that is wondering, very small tubes (like cotton reels) that help to drain away excess fluid building up in the middle ear.

Here’s a helpful handy diagram to show you exactly what I mean!*

We’re hopeful that the grommets will drain away the fluid and that he will then pass his hearing tests – as the Audiology team believe that it’s the pressure of the fluid that is causing his hearing loss.

And, to be honest, that’s what I’m banking on – because otherwise, it’s likely that the Meningitis has damaged Henry’s hearing and so, if he doesn’t pass after the grommets have fallen out then we’ll need to consider hearing aids for him – and that, being completely honest, for some reason, makes me feel very uneasy.

Now, in my rational mind I know that this is a simple and straightforward procedure.

I know that he will be fine. That it’s routine and done hundreds of times a week. And that if, after it all he needs hearing aids then that is NOT a problem.

But yet I still feel like my world is spinning.

Henry on the other hand, thankfully, is full of beans. He’s his usual belligerent self, shouting at his sister, raiding the fridge any chance he gets and stomping about the place wittering on to himself and anyone that will listen (and pretend to understand what he’s going on about!). 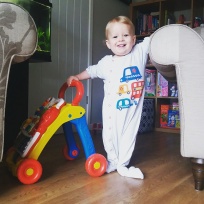 Tomorrow is unknown. I don’t have a clue what to expect. And I think that’s half of the problem.

I’m strengthened by structure, and lists, and details.

Once again, I’ll be on that ward.
The ward I had really hoped we’d never have to return to.

And once again, my baby will be handed off to someone else to take care of.

My control of the situation will be gone and, for a short time, so will my beautiful, smiley, happy son.

If you have any experience of this, or you can offer any pearls of wisdom to help me through then please feel free to comment.

Here’s to a quick and easy procedure, and to never having to go through this again!

But for now, we wait…